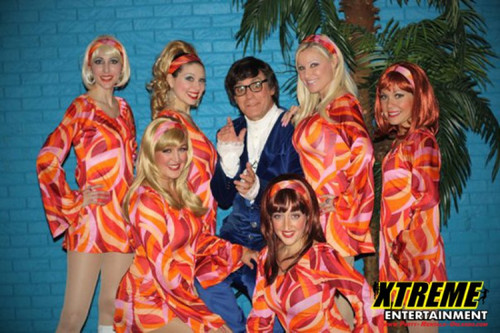 Hire Austin Powers impersonator and His Shagadelic Girls from Xtreme Entertainment for a grrrooovy time at your next event!

He is a World Class Celebrity Impersonator and has been portraying The International Man of Mystery since 1999.

Greg's uncanny resemblance to Austin Powers is complimented by his accurate recreation of the total character, including accent, 'shagadelic' costumes and irresistible personality. Greg has entertained at numerous corporate and private events, entertaining many famous, nearly famous and not so famous people.

He has the moves, the grooves, the lingo, the accent, the charm and YES, he even has the chest hair...but don't worry, he won't show it, baby! Bring along his Shagadelic Girls and inquire about his 20 minute show that includes singing, dancing, audience participation and of course, comedy!

Greg has performed all over the US as Austin, including Las Vegas, L.A., New Orleans, Atlanta, Boston, Atlantic City and all over Florida!

Turn your event into the Swingingest Party in Swingtown, baby!

PERFECT for Sixties Parties, Disco Parties, Red Carpet, Hollywood Themes, Spy Themes, Woodstock, Rock and Roll and he also is a FANTASTIC MC for any event, especially for your All Star Celebrity Impersonation Shows!

Whatever the occasion, add the British humor and wit of Austin Powers... and don't forget to have him bring along the Shagadelic Girls!!!

He also performs as a DJ/MC, playing the very best of Sixties Dance and 70s Disco Music. He can do it by himself or bring a DJ with him as he MCs the party.

Just as each event is unique... so are the costs associated with performing, travel, lodging, etc.. Please call us with a date and location for your event and we will promptly return a price quote.

RELATED PRODUCTS Here is a selection of other products you may be interested in for your next event!

Rent a Don Rickles impersonator from Xtreme Entertainment for your upcoming event! The only impersonator authorized by Don Rickles!Looking for something different at your next Corporate Event?"Hello...

Hire American Idol Impersonators of Paula, Randy, and Simon from Xtreme Entertainment for your upcoming event! These characters work great for events that have karaoke competitions or any corporate...

Make your next corporate event, awards banquet, trade show, fundraiser, sophisticated party or advertising promotion a hit by having "Napoleon Dynamite" from Xtreme Entertainment be part of the...

Rent a Rod Stewart impersonator from Xtreme Entertainment for your upcoming event! He is an exciting tribute artist whose unbelievably uncanny resemblance to Rod Stewart continues to leave audiences...

RELATED PRODUCTS Here is a selection of other products you may be interested in for your next event!

Sumo wrestling has long been the favorite for corporate events, grad night parties, church bazaars, town festivals, and any other event. Contestants put on hilarious foam filled suits complete with...

Rent a hypnotist from Xtreme Entertainment to entertain guests at your upcoming event. Our Hypnotist possesses the ability to Hypnotize Volunteers on stage. Is it real? He says "YES"! And he...

Our Living Tables from Party Rentals Orlando and Xtreme Entertainment make a great impression as they stroll amongst your guest serving appetizers or special drinks.  Entertaining servers stand...

Our rentable Giant Event Grill from Party Rentals Orlando and Xtreme Entertainment is will cook 65 Hamburgers or 125 Hotdogs at one time! This high traffic grill is perfect for all types of...

HOT RODS Bumper Cars from Party Rentals Orlando and Xtreme Entertainment will have your guests smashing and bumping for hours!Bumper cars are just one of the many Carnival and Amusement Park Rides...

Hire our Professional Magicians and Illusionists from Xtreme Entertainment to come to your next event. Our magicians offer a variety of amazing magic services like: Strolling Magic Magic Shows Magic...

Hire American Idol Impersonators of Paula, Randy, and Simon from Xtreme Entertainment for your upcoming event! These characters work great for events that have karaoke competitions or any corporate...